A single mother Karen Barclay and her son Andy Barckay moves to a new city and while trying to encourage her son to make new friends; she gives in to his request and got the popular BUDDI doll that their sales at the mall where she works specializes on.

Now, a depressed worker that works in the production company of the high-tech BUDDI dolls gets resentful after his boss says some merciless words to him; he picked up the BUDDI doll that he was currently working on and sets it high to malfunction. 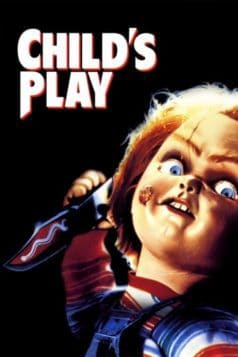 Andy gets the doll and is super excited, he chats with the doll, tucks him, and made the doll his best friend. Names it CHUCKY.
On a night, while watching a movie with his friend /neighbours a stabbing scene occurs and PUGG Andy’s friend starts laughing. BUDDI sees this and goes to the kitchen to pick up a knife and headed for PUGG… This is where it all begins …
BUDDI continues to pick things up. Evil. Murder. And obsession with being the only friend of Andy’s.
YEAR: 2019
Initial Release: 20 June 2019
Written by: TYLER BURTON SMITH
Director: LARS KLEVBERG
Starring:- AUBREY PLAZA as Karen Barclay
GABRIEL BATEMAN as Andy Barclay
MARK HAMIL as Chucky.
BRIAN TYREE HENRY as Mike Norris
TIM MATHESON as Henry Kaplan
TY CONSIGLIO as Pugg.
A remake of the 1988 horror film of the same name.
Click below to watch full movie:
THE MOVIE-CHILD’S PLAY
Tags:CHILD'S PLAY, GABRIEL BATEMAN, LARS KLEVBERG, MARK HAMIL, Movie, TYLER BURTON SMITH

SUpport Us With Crypto